We’re facing an epidemic of childhood and teen anxiety… but what if there’s a way to raise your kid so they avoid it? What if the answer is really simple? What if it’s… child’s play?

My son is still only three, so we’re in the early days of this. But I’m aware that older children and teens with severe allergies often suffer from anxiety, as a result of the relentless vigilance they have to show… and the social awkwardness that comes with it.

So when I heard that the University of Sussex and the Sussex Wildlife Trust were partnering up in a psychology experiment to test whether risky play could help protect kids from developing anxiety, I signed us right up!

We love a bit of outdoor play anyway. I’m (almost) as much of fan of a muddy puddle as he is. So it was a great excuse to don wellies and waterproofs, make like mudskippers, and head to Sussex Wildlife Trust HQ.

We were among about half a dozen child and parent couplings there. All the kids were fitted with a go-pro camera to record their messy japes, and each pair wore coordinating coloured vests. We were Team Yellow.  First up, both parent and child did quick questionnaires asking how we were feeling in that moment. Then the psychologists took saliva samples from the children to analyse for stress hormones: “think of the yummiest food you can and see if you can make lots of bubbly spit…”

Then we were unleashed upon the awesome assault course that the Sussex Wildlife Trust team had built: a tree swing, tunnel, rope bridge, logs-a-plenty for a-climbing; plank bridges, wood saw, drill and best of all… best of all… the BIGGEST MUDDIEST SLUDGIEST PUDDLE you have ever seen.

He made a beeline for it, and splashed around like a pig in the proverbial. If you’re feeling anxious about making your kid become anxious… then seeing them splosh straight into a slop of mud with wild abandon is a pretty great tonic. 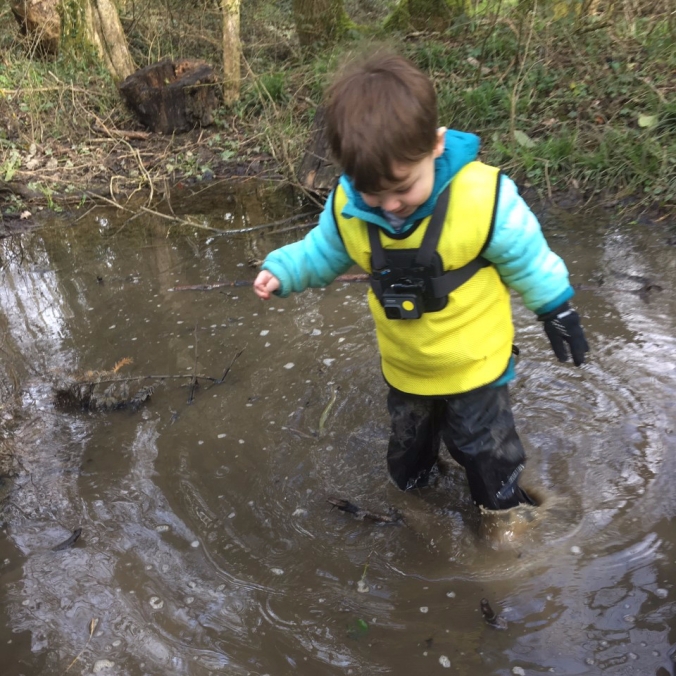 More saliva samples were taken and follow-up questionnaires completed, and the kids settled down for a story and a hot chocolate.

The Sussex Uni team are doing months of these events, meeting and analysing hundreds of kids as part of the research. The result won’t be ready for a while yet, but the working hypothesis is that risky play might be able to protect kids against stress and anxiety.

Judging from his behaviour – generally and on that morning – I definitely don’t think he’s caught any anxiety yet, and helpfully, he also seems to understand his allergies on a straight-forward factual level.  I’m hoping it’ll stay that way. But perhaps ask me in ten years time when it’s all become a lot more complicated.

But until then, I’ll leave you with the experience in his own words:

“THE PUDDLE WAS AMAZING! I DID GET SOOOOOO MUDDY! AND THE TUNNEL DID HAVE LAVA IN IT! LAVA*!”

So, if you’re near Sussex, and have a three-to-five year old, and fancy signing up, the details are here.

*Yeah, watch out for the lava.

Just a three year old with a drill.